(LESSON 1.1) The Key to Figuring Out a First-Act Break for Your Story (Even When Your Plot Is Really Complex)

Basically, it’s what it sounds like. It’s an invisible boundary between the beginning, or Act One of your story, and its middle (a.k.a. Act Two). 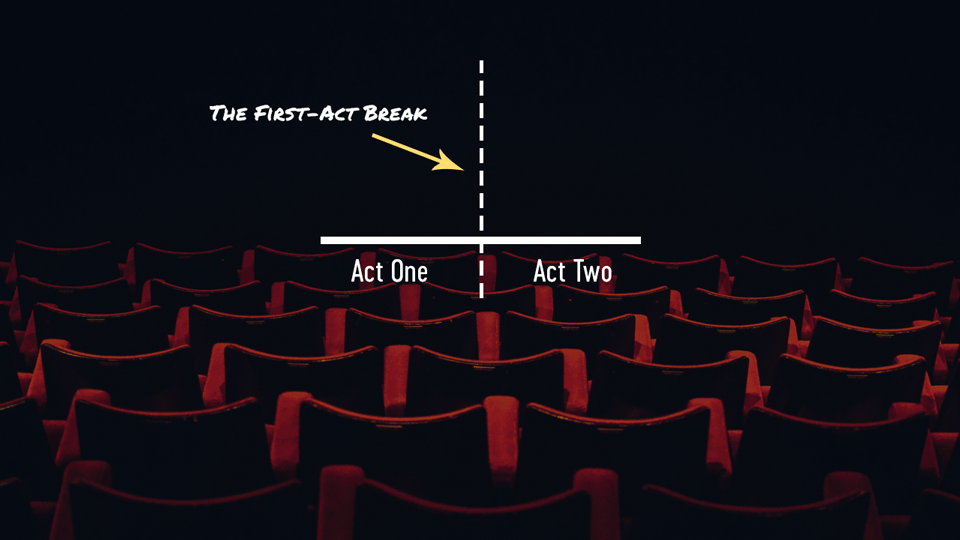 In practical terms, this means that your first act break is a combination of the last event from Act One and the first event from Act Two. Together, these events equate to your protagonist taking a solid step toward achieving his goal. 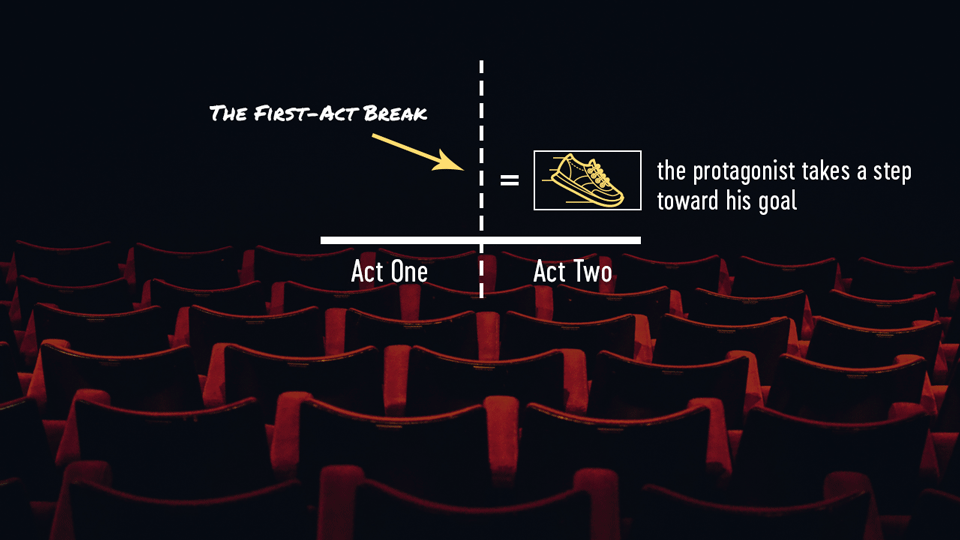 To figure out the first-act break of your story, you need to know two things:

Let’s start with the first item, your protagonist’s goal. What is he going after? What is he pursuing? This goal is what the plot of your story will be built upon.

If your story has several complex aspects (which happens a lot with science-fiction and high fantasy), it may feel overwhelming to come up with the step that your protagonist will take right around the first-act break.

If you do feel overwhelmed, don’t think about all of these complexities. Instead, try to reduce your protagonist’s goal to an infinitive. 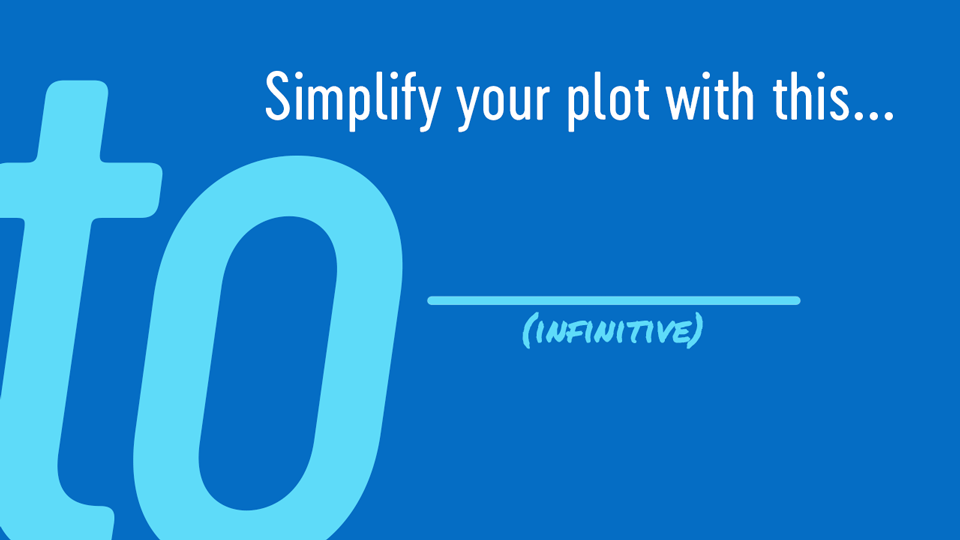 Then, think about an action (perhaps a “bite-sized” step) that’s connected to this verb form. This will be the foundation of your first-act break.

In Writing Screenplays That Sell, Michael Hauge argues that all plots for commercial stories can be summarized by the following five infinitives:

If you’re having a hard time reducing your plot to an infinitive, use one of these as a starting point. 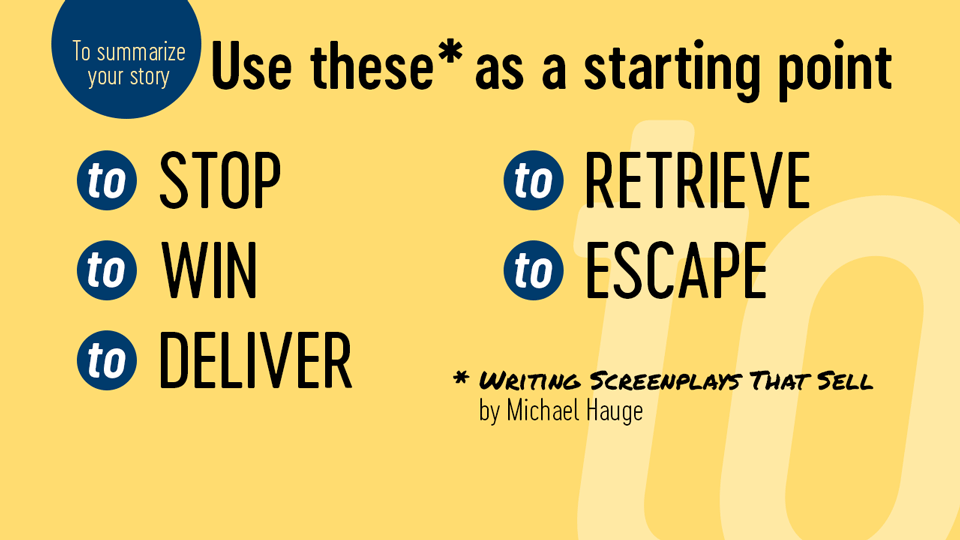 For example, in the novel Divergent by Veronica Roth, society is divided into five factions:

Then there are the people without a faction (the factionless), and the people who could belong to multiple factions (the divergent). 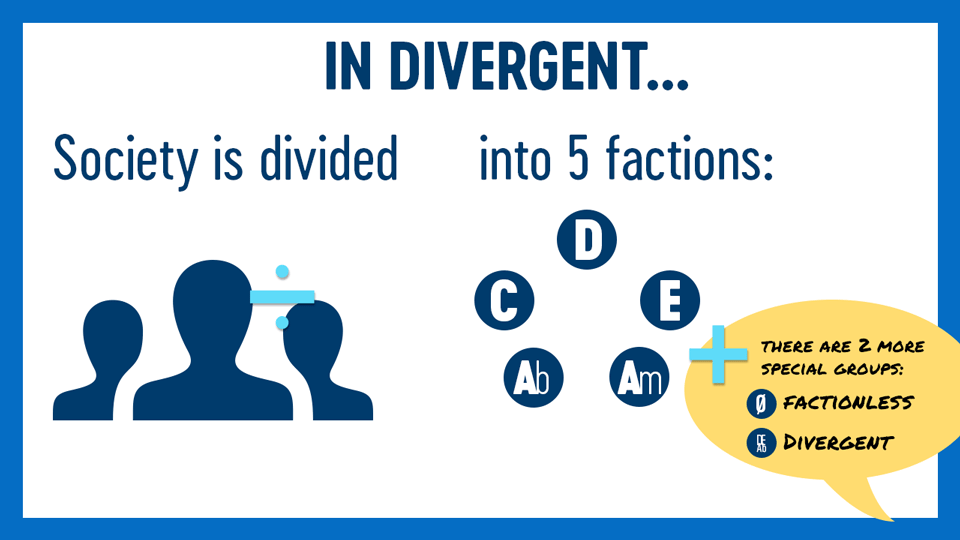 If you were writing a story like this one, it’d be very easy to get so sidetracked by all of these factions, that you’d lose sight of your story’s structure. But you could get back on track by focusing on your protagonist’s goal.

In this case, it’s to survive Dauntless training.

When you focus on that, all the distractions that come from the faction system fade away, and you can determine a potential first-act break for your story: a step that would take the protagonist closer to passing training.

(By the way, this—i.e. “boiling down” your plot to an infinitive—is a simple but effective technique to help you summarize a complex plot in a book description or query letter.)

Try it out for yourself in the writing exercise below!

To complete this exercise, use pages 6–8 of your Three-Act Structure Workbook.

In your workbook, you’ll find summaries for the following four stories:

Each summary is loaded with backstory, worldbuilding elements, and other details. “Boil down” each plot to a single infinitive.

As previously discussed in this lesson, you need to know two things in order to figure out the first-act break of your story: 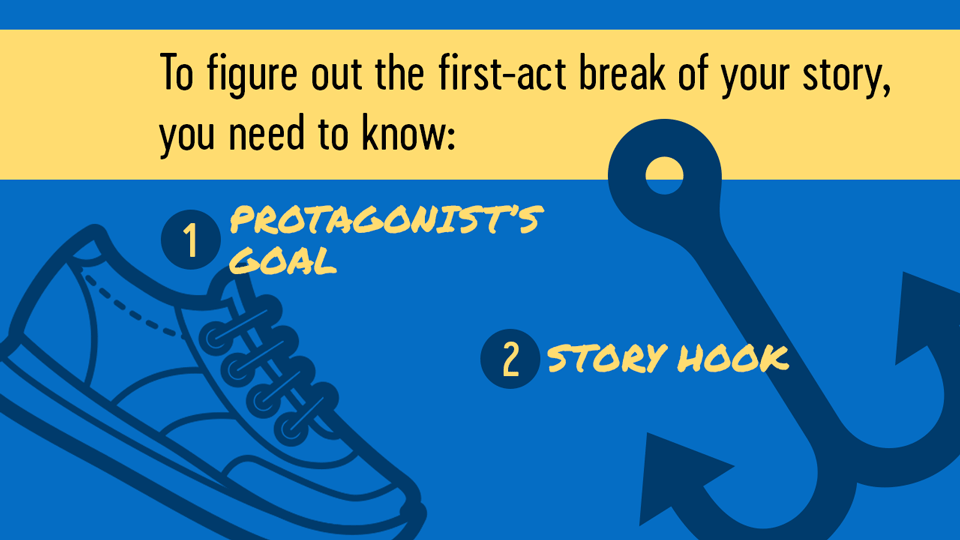 We already talked about the former. Now let’s talk about the latter, i.e. the hook.

We’ll dive into the details in the video below. Click play to start!

So. You know (1) your protagonist’s goal and (2) your story’s central hook. And now it’s time to figure out a first-act break for your story.

Find out in the video below, which explains four ways the first-act break commonly plays out. Click play to start!

Writing Exercise: Away We Go!

To complete this exercise, use pages 9–10 of your Three-Act Structure Workbook.

In your workbook, you’ll find summaries of the following four stories:

Based on these summaries, see if you can come up with a potential first-act break for each story.

To complete this exercise, use pages 11–12 of your Three-Act Structure Workbook.

Review the films and novels in your library. Find examples of first-act breaks that involve a change in geographical location for each of the seven continents.

Also, if you want to find an adventure story where the protagonist travels to (or perhaps from) Antarctica, be my guest. But if you prefer, in lieu of Antarctica, find an example where the change in location involves a fantasy realm or outer space.